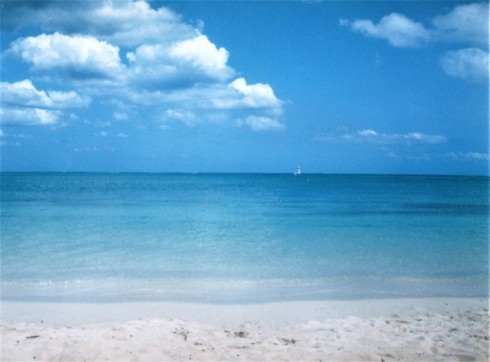 Pristine beach ocean in front of our resort in Rodriguez. Photo by me

The tiny spot to the far right is Rodriguez

We’re surrounded by thousands of kingfish in yet another pristine ocean. That night we will experience some of what we’ve seen under the ocean in the form of Fish Creole as part of a traditional buffet style meal. We walk long distances on the beach and in the road to explore the beauty of the island. Infrastructure is non-existent, but doesn’t seem to be a problem since most of the traffic consists of cows! The island of Rodriguez is part of Mauritian territory and if we didn’t live in Mauritius, I would never have known that this place existed. Rodrigues is a beautiful and sleepy little island 560 km east of Mauritius in the middle of the Indian Ocean, measuring only 18 km in length and 8 km wide. The island is the smallest of the Mascarene Islands and a dependency of Mauritius. Rodrigues Island is entirely surrounded by coral reefs offering beautiful scenery, world-class diving and snorkeling. Since it hasn’t really featured on the tourism map, its pristine unspoiled beauty adds to its small island charm. The people living in Rodrigues eat local livestock such as birds, fish, seafood, turtles and tortoises, but its natural resources are not exploited and everything is sustainably harvested to only meet the basic nutritional needs.

The traditional music of the island is known as Sega Tambour. The music has an accentuated beat, usually accompanied by an accordion, clapping and the use of improvised percussion instruments like bamboo and bow saws. The folk dance music is similar to polkas, quadrilles, waltzes and Scottish reels. The people are lively and love to grab tourists by the hand to dance with them. We danced well into the night to the beat of the Sega Tambour every night during our stay in a quaint boutique guest house on the beach.

The main language is Rodriguan Creole, but English and French are used as the languages of government administration, the courts and business. Rodriguan Creole is very similar to Mauritian Creole, though some words are pronounced differently. Most of the people are of African decent with a minority of mixed race.

For sample recipes out of my book for the Seychelles and Rodriguez, click on the Recipe section of this blog.