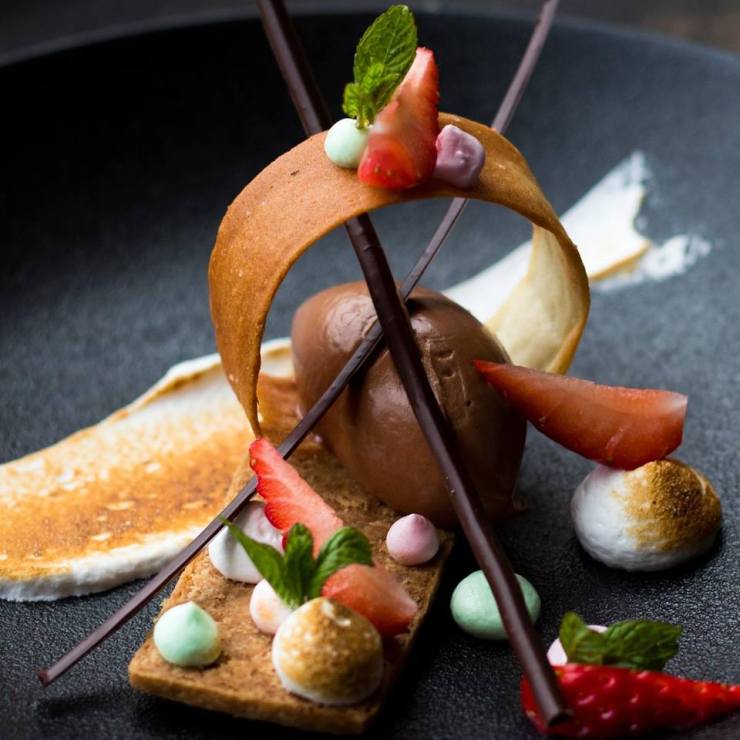 A little teaser from our book under construction: COVER STORY. The recipe for our book cover appears later in the book. It was first conceptualized in my mom’s mind and she created it in her kitchen. She called it a marshmallow fridge tart. The recipe is simple to execute and brings back sweet memories from a childhood in my mother’s kitchen. I had no choice. The recipe book wouldn’t be complete without it and there is also a bit of a back story as to how I got introduced to s’mores. With all this in mind, I took my mom’s recipe, adapted it slightly by adding milk chocolate and by calling it a S’Mores Torte. Our chef Craig took the recipe, deconstructed it and turned it into this beauty worthy of our book cover.

Since Craig forewarned me that he liked the recipe and that he was going to turn it into his very own creation, I wrote the recipe, made it and photographed it as the simplified version. There was no way I could create this dish like he did. When I asked him what inspired him to make such a simple dessert into such a great thing of beauty, he said:

“I just felt like it was one of the recipes that would work well if I decided to play with it and deconstruct it a bit. There are some desserts where the traditional way is best, but when I can, it is fun to take them apart and put them back together again.”

There is a little bit of a back story to all of this. I was first introduced to s’mores in the Bahamas in 2004. I was scuba diving on a marine biology program on the island of Eleuthera and one of the fellow divers suggested we made s’mores. We had bought a truckload full of chocolates that filled the fridge and freezer in our little house to maximum capacity and I was busy loading them up when he said, “Let’s get some s’mores.”

I completely lost it. I thought he had said, “Let’s get some more.”

I yelled at him: “Are you crazy! We have enough chocolates to feed the entire Bahamas!” Turns out all he said was that we should make s’mores and I heard wrong. My response? “What the heck are s’mores?!”

He laughed until tears ran down his face, his dreads swinging with the rhythm of his laughter. He explained, and therein lies my hilarious introduction to the American way of marshmallows, Graham crackers, chocolates, sticks and dessert on fire.

(You will soon be able to make this easy and delectable dessert in the comfort of your own kitchen, so watch this space. Your children will love you forever!)